Crude oil prices are slightly lower in Asia-Pacific trading as equity markets fall following a downbeat US session. A strong US Dollar is weighing on the commodity ahead of tomorrow’s FOMC rate decision. The US central bank is expected to increase its benchmark rate by 75 basis points. However, a 100-bps move is also possible, according to Fed funds futures. Oil traders are keen to review the Fed’s updated economic projections via the Summary of Economic Projections (SEP), which are expected to trim growth forecasts from June’s SEP.

The market’s net view of the FOMC’s appetite for further tightening will likely dictate where oil prices go. A hawkish one would likely be a negative, while a dovish interpretation would likely provide a tailwind. Rate hikes are expected from The Swiss National Bank (SNB) and the Bank of England (BoE), adding to a chorus of rising global interest rates.

Russia’s President, Vladimir Putin, is expected to deliver a speech today after initial delays. Analysts fear that Mr. Putin may escalate the fight against Ukraine, with the conflict mostly contained to the east following a largely successful Ukrainian counteroffensive. If an escalation is announced—a likely outcome, given the recent news of planned referendum votes on the annexation of Ukrainian territories–it would likely send oil prices higher.

China’s oil imports have slowed, according to customs data released earlier this week. The data for August revealed a 9.4% decline in oil imports from a year ago, although inbound Russian oil rose nearly 30% during the same period. Meanwhile, OPEC data showed that the cartel is struggling to keep up with its production goals, with a shortfall of around 3.5 million barrels per day (bpd). A drop in Nigerian output due to poor investment and theft saw the African country’s August output fall to 1.18 million bpd, the lowest level this year.

An increase in the US 3:2:1 crack spread, a proxy gauge for refiners’ profit margins, has increased over the last week after hitting its lowest point since March. That is a bullish signal for oil demand, although the gauge is relatively subdued to levels traded over the last few months. A large rebound in gasoline demand in the United States is hard to see amid the aggressive increase in interest rates. Overall, the FOMC is set to drive prices in the short term. 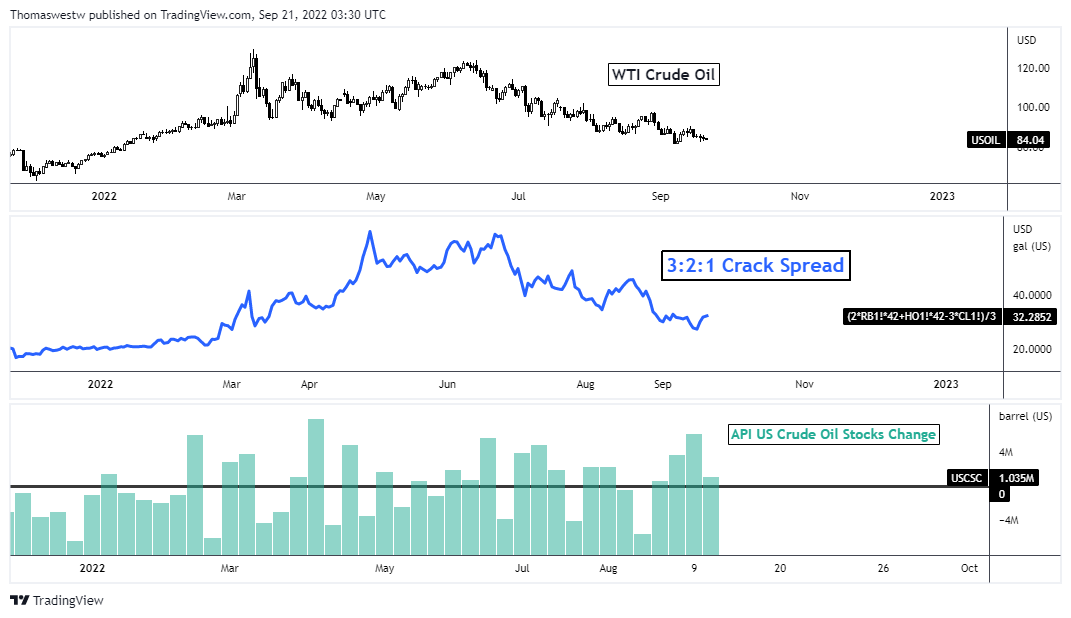 US Dollar Index declines sharply below 111.00 despite soaring…

US Dollar Faces Support Ahead of High Importance US Data

XAU/USD Extends Rally, Buoyed by Falling Yields and a Weaker…